School is back in session! Humintell Director David Matsumoto has been a Professor at San Francisco State and Judo Instructor for over 30 years. In this video, he explains how reading facial expressions of emotion and body language (nonverbal behavior) has so many benefits in the educational process. For teachers, reading their kids’ and their student’s facial expressions of emotion is incredibly important. It helps them know if the students are getting the material or not, engaging with the classroom or not, and so many other things.

For kids, it’s important to read each other’s nonverbal behavior and especially facial expressions of emotion for many reasons. It’s important for kids to be able to read their teachers so they can get the additional messages about what they’re trying to learn.

But it’s also very important for kids to be able to read facial expressions of emotion in everyone else for their social and emotional development, which is so important and is such an important part of the educational process- above and beyond the knowledge that kids learn. But as you know as kids and teachers in many states and countries around the world are going back masked with a large portion of our faces covered, reading body language and especially facial expressions of emotion is a challenge.

And not doing so challenges the many benefits in reading facial expressions of emotion that would normally occur when we’re back in school.

In fact, there’s been some recent research about this that has shown that people are less accurate in reading each other’s facial expressions of emotion because of the masks.

All is Not Lost We can still learn to read facial expressions of emotion even when people are wearing masks.

All of us here at Humintell want to help especially educators overcome this challenge during our recovery from the COVID-19 pandemic.

We’ve got a number of blogs on this topic that can hopefully inform us more and give us more important knowledge about this important issue:

The Role of Nonverbal Communication in the Classroom

We’ve also got some brand new online courses that can help people learn to read facial expressions of emotion even when others are wearing masks. They made be helpful not only for educators but also for health professionals, security personnel, and anyone who’s dealing professionally with others wearing masks.

So please check out our resources. We hope that they can help all of us be the best that we can be in reading people and reading facial expressions of emotion during this difficult time.

The post Body Language in the Classroom first appeared on Humintell. As children around the country return to school, the debate whether or not children should wear masks in school continues. In addition, the issue of whether kids wearing masks delays development has become a hot-button topic for many.

Some parents believe their children are being negatively impacted. They suggest that kids are unable to read social cues or see expressions and thus, they do not want their children or anyone else wearing them.

But those who want to prevent their unvaccinated kids from contracting COVID state that developmentally, children are just fine, even when they and everyone else around them is masked.

What does the latest research say about children, mask wearing, emotion recognition and child development? Read on to learn more. A key part of learning to communicate for a child is watching the faces, mouths, and expressions of the people closest to them. Babies and young children study faces intently, so the concern about masks covering the face is understandable. However, there are no known studies that use of a face mask negatively impacts a child’s speech and language development.

Interestingly, visually impaired children develop speech and language skills at the same rate as their peers. In fact, when one sense is taken away, the others may be heightened. Young children will use other clues provided to them to understand and learn language. They will watch gestures, hear changes in tone of voice, see eyes convey emotions, and listen to words.

Some people worry that although young infants shouldn’t wear face masks themselves, they will be subjected to developmental delays from not being able to see others’ full faces.

Yet experts say that babies and toddlers can get all the face time they need in the home with family members who aren’t wearing face masks.

By providing dedicated time to converse with your child without screens or other interruptions, children should reach their expected milestones. Specifically, a mask obstructing a face limits the ability of people of all ages to infer emotions expressed by facial features, but the difficulties associated with the mask’s use were significantly pronounced in children ages 3 and 5 years old.

The researchers’ findings are of essential importance; they suggest that we live in a time that may potentially affect the development of social and emotion reasoning. In addition, young children’s future social abilities should be monitored to assess the true impact of the use of masks.

One proposed solution is to design devices for personal protection that allows visibility of the lower part of the face, especially all environments important for developing social and interaction skills in children, such as in education or rehabilitation. This is especially important for children suffering from sensory or cognitive deficits. 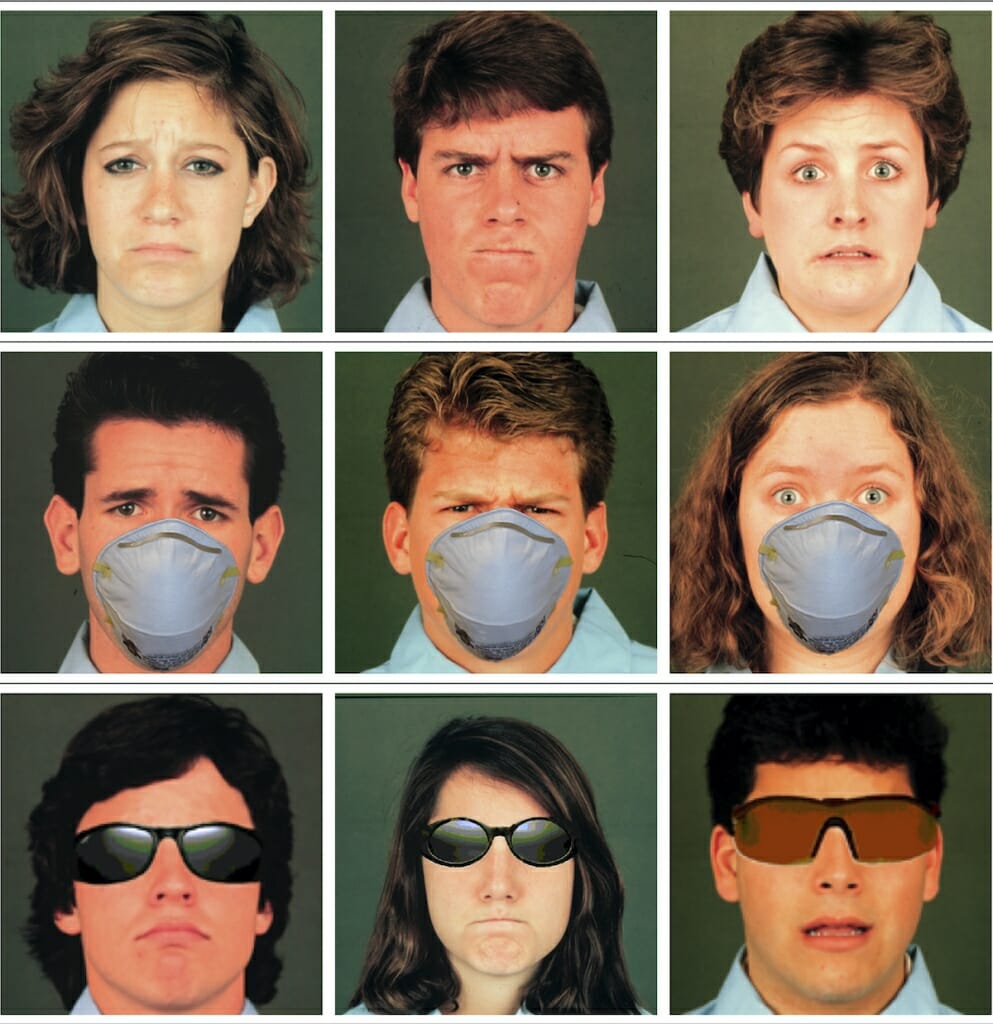 In research conducted by Ashley Ruba and her team at the University of Wisconsin–Madison, researchers used our own JACFEE/JACNeuF images (available here) to conduct their study.

They showed more than 80 children, ages 7 to 13, photos of faces displaying sadness, anger or fear that were unobstructed, covered by a surgical mask, or wearing sunglasses.

As reported by UWM, the kids were asked to assign an emotion to each face from a list of six labels.

The results? The kids were correct about the uncovered faces as often as 66 percent of the time, well above the odds (about 17 percent) of guessing one correct emotion from the six options.

The researchers suggest if children can do better than guessing at emotions even with a mask in place, they’re likely to do even better in real-life situations. It all adds up to kids growing in their emotional capabilities, even if some of their interactions with others are happening through face coverings.

“I hope this settles some nerves. Kids are really resilient. They’re able to adjust to the information they’re given, and it doesn’t look like wearing masks will slow down their development in this case.”

For more on how children learn about emotions, watch this lecture by Dr. Ruba below:

Tips to Communicate with Kids while Wearing a Mask

The American Academy of Pediatrics has some helpful tips to be a better communicator: For many, face masks have become the symbol of the global fight against COVID-19. But while face masks’ medical benefits seem to be clear, little is known about their psychological consequences, particularly on emotion recognition.

Drawing on theories of the social functions of emotions and rapid trait impressions, researchers from University of Groningen in The Netherlands tested hypotheses on face masks’ effects on emotion-recognition accuracy and social judgments (perceived trustworthiness, likability, and closeness).

The Study and Results

The Dutch study consisted of 191 German adults. Participants were (without their awareness) randomly assigned toone of two conditions: In the control condition, participants saw original face stimuli; in the mask condition, target faces were covered by a prototypical face mask.

After giving active informed consent and agreeing to not download the study materials, participants provided basic demographic information. Subsequently, participants completed an emotion-recognition task and provided social judgments. They then completed measures of their mask-as-threat and mask-as-opportunity associations. The researchers also assessed participants’ preoccupation with COVID-19 and their exposure to face masks.

The study out of The Netherlands is not the only research that has looked at this topic.

Specifically, a mask obstructing a face limits the ability of people of all ages to infer emotions expressed by facial features, but the difficulties associated with the mask’s use are significantly pronounced in children aged between 3 and 5 years old.

The researchers’ findings are of essential importance, as they suggest that we live in a time that may potentially affect the development of social and emotion reasoning, and young children’s future social abilities should be monitored to assess the true impact of the use of masks.

They also stress designing devices for personal protection that allows visibility of the lower part of the face may be crucial in all environments important for developing social and interaction skills in children, such as in education or rehabilitation, especially for those suffering from sensory or cognitive deficits.

You Can Still Gain Insights

While it is true that masks block faces, all is not lost. You can still gain insights into people’s emotional states. Even if someone is wearing a mask, don’t abandon the thought that we can pick up cues in the face.

For those of you who have had our training on reading facial expressions of emotion, there’s a lot of things that go on in the upper half of the face. Clearly you can’t see the mouth region, but you can still gather things in the upper face region.

What expressions can you see?

Learn How to Read Emotions on Masked Faces 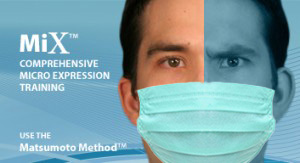 Last year we launched our Masked MiX training course that will help you unmask facial expressions of emotion.

This brand new, one-of-a-kind course helps you to regain those insights about people’s emotional states.

Learn More and Save 25% on Masked MiX with code MASKED when checking out!