It is shameful to say, but my home country South Korea’s suicide rate remains highest among members of the OECD and this is also apparent among students. In fact, suicide is the leading cause of death among South Korean teenagers. Statistics Korea (2014) reported that suicide was the number one cause of death among people aged 10 to 39. As teenagers are emotionally unstable and are susceptible to other people’s behavior, they are largely influenced by media coverage of suicides. The influence maximizes when the report is about a celebrity’s suicide. Consequence could be as serious as more teenagers committing suicides, following what they’ve seen in the media. Such increase of copycat suicides after a “widely publicized suicide” is called Werther effect. 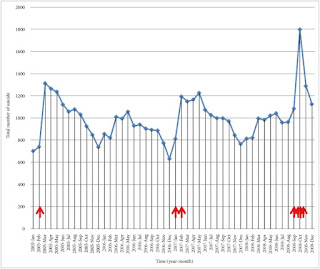 Monthly total number of suicides (South Korea 2005-2008). Arrows indicate points of celebrity suicides.      There were seven cases of celebrity suicides from 2005 to 2008 in South Korea, and each one of them produced numerous follow-up reports on all kinds of media including newspaper and television. An analysis of subsequent suicides revealed that they definitely induced copycat suicides (Jang, Sung, Park, & Jeon, 2016). There was a great increase in the number of suicides, especially among people of the same gender, and many of them used the same method. The Korean Association for Suicide Prevention suggested a “recommendation for media reports on suicide” in 2004, yet substantial media coverage has still been reported. Stronger regulations are needed for better media reporting of suicides. For instance, specific depiction of the suicide method should be restricted. In addition to stricter measures to media coverage, there has to be an effective system within the society ready to cope with potential copycat suicides.References Jang, S. A., Sung, J. M., Park, J. Y., & Jeon, W. T. (2016). Copycat suicide induced by entertainment celebrity suicides in South Korea. Psychiatry investigation, 13(1), 74-81. Ji, N. J., Lee, W. Y., Noh, M. S., & Yip, P. S. (2014). The impact of indiscriminate media coverage of a celebrity suicide on a society with a high suicide rate: epidemiological findings on copycat suicides from South Korea. Journal of affective disorders, 156, 56-61. Korea, S. (2014). Cause of death statistics of Korea. Stack, S. (1987). Celebrities and suicide: A taxonomy and analysis, 1948-1983. American sociological review, 401-412.