Barbie has had many critics who claim she has a negative impact on the ambitions of young girls. This successful advert (with over 23million youtube views) was designed to change the public perception of Barbie, showing that she is not just a pretty face. Instead, Barbie is a professor, a vet, a sports coach and a businesswoman. By playing with Barbie, your daughter can also be anything she wants to be. This advert achieves this by attempting to change individuals subjective norms about Barbie, and also, general attitudes towards women’s career aspirations. This is an effective tool for persuasion because it is in line with Ajzen’s (1985) model of behaviour change – The theory of planned behaviour. The theory of planned behaviour suggests that in order to change an individual’s behaviour you need to first change their intentions. Ajzen (1985) suggests that this can be done in three ways; by changing the individual’s attitude, subjective norms or perceived behavioural control (see figure 1). 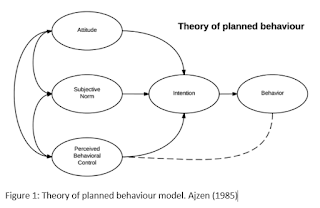 The impact of changing subjective norms on behaviour has been highlighted in many studies looking at various behaviours such as smoking, drinking and recycling. For example, one study found that the amount of households who claimed to recycle regularly increased  as recycling became normative in the UK (Thomas & Sharp, 2013) (see figure 2). This shows how changing the subjective norms regarding a behaviour can be a powerful tool in changing the actual behaviour. Thus, these findings suggest that adverts such as ‘Imagine the possibilities’ can help to change an individual’s view of Barbie. Instead of the stereotypical view that Barbie negatively affects the ambitions of young girls, individuals may now have positive view, and thus, be more likely to purchase the doll. 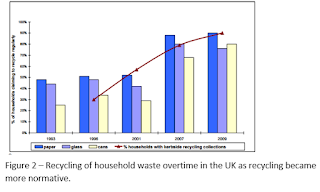 Furthermore, one reason that this advertisement was incredibly successful and went viral in 2015 is its target audience. Unlike typical Barbie adverts the target audience of this ad isn’t young girls, but their parents. It aims to change adult’s perceptions of the Barbie brand, not encourage young girls to play with the toys. This advert cleverly creates positive feelings in individuals through its use of ‘cute’ images. However, research has shown that although cute advertisements aid recall, they do not seem to have an impact on persuasion (Phillips & Stanton, 2004). This is interesting in the context of this advert because it suggests parents will have increased memory for this Barbie advert, but are unlikely to buy more Barbie dolls as a result of viewing it. The fact that cute images do not increase persuasion is not a problem for the makers of this advert. This is because Barbie also has many other adverts that specifically target children. It is these adverts that persuade the parents to buy Barbie products, as young girls use many powerful persuasion techniques to get the toys they have seen. For example, by simply asking their parents for the toy, research suggests they are likely to get what they want 50% of the time. For instance, Flynn and Lake (2008) found that to get five people to answer a questionnaire, participants only had to ask 10 passers-by to complete it. In addition, children often use repetition and ‘pester power’ to get items they have seen advertised. In order to keep their children happy, parents often give in and buy the product (Lawlor & Prothero, 2011) All these findings combined suggest that when young girls are pestering their parents to buy toys, the parents will have increased recall for this advert and a positive view of the doll. This acts as an availability heuristic and brings these products to the front of parent’s minds, thus, they will be more likely to purchase Barbie’s for their children. ReferencesAjzen, I. (1991). The theory of planned behavior. Organizational Behavior and Human Decision Processes. 50(2), 179–   211. Flynn, F. J., & Lake, V. K. (2008). If you need help, just ask: Underestimating compliance with direct requests for help.       Journal of Personality and Social Psychology, 95, 128–143.Lawlor, M., & Prothero, A. (2011) Pester power – a battle of wills between children and their parents. Journal of                   Marketing Management, 27, 561–581.Phillips, D. M., & Stanton, J. L. (2004). Age-related differences in advertising: recall and persuasion. Journal of                   Targeting, Measurement and Analysis for Marketing 13(1), 7–20.Thomas, C., & Sharp, V. (2013). Understanding the normalisation of recycling behaviour and its implications for other     pro-environmental behaviours: a review of social norms and recycling. Resources, Conservation and Recycling, 79, 11–20.